"> The Water Restrictions in Cape Town: What you Need to Know | Bench Africa

The Water Restrictions in Cape Town: What you Need to Know 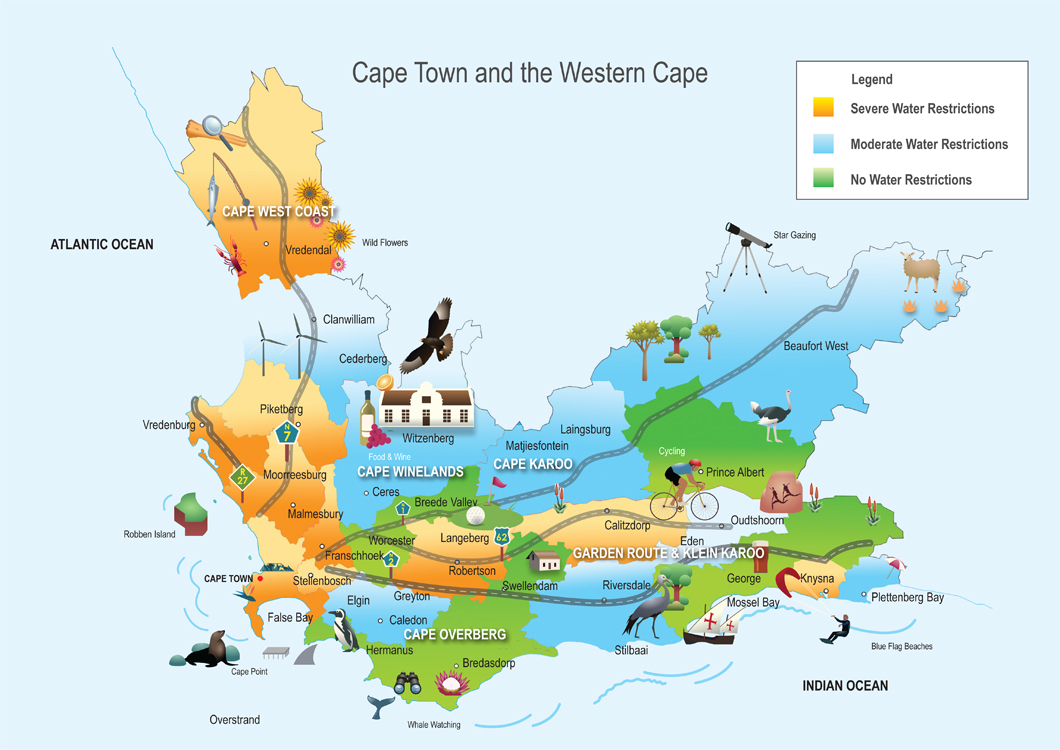 A handy map to illustrate where the water restrictions are in effect.

Despite the drought visitors should be assured that Cape Town is and will continue to be both a viable and an incredible tourist destination. The message is clear – Cape Town is open for business.

• The drought is regionally specific and has not affected the rest of South Africa. Just 90 minutes away from Cape Town in popular destinations such as Hermanus, there are no water restrictions whatsoever;
• On 08 March 2018 The City of Cape Town announced that 'Day Zero' is no longer a threat in 2018 due to locals drastically reducing their water consumption;
• Day Zero is the hypothetical day when dam levels might fall below 13.5% and Cape Town residents would be restricted to 25litres of water per day in order to ensure that the dams do not run dry. It is NOT the day that Cape Town runs out of water;
• Nearby farming communities have contributed 10 billion litres to alleviate the situation;
• Cape Town’s Mayor has vowed to “not allow a well-run city to run out of water” and plans are being implemented to tap into other sources of water;
• The most senior officials working on this crisis firmly believe that although it will take an effort by all involved, Cape Town will avoid what has been called “Day Zero”;
• Even though there are water restrictions in place visitors will still be able to enjoy the diverse and world-class experiences Cape Town and the Western Cape have to offer;
• Although sporadic, it continues to rain in Cape Town. The city is hopeful that winter rains will be sufficient to fill their dams;
• International tourists account for just 1% of water usage In Cape Town during peak season;
• The impact of tourism on water consumption is insignificant compared to the benefit that tourism brings to the city – tourism directly creates 320,000 jobs and brings with it around R40 billion in investment each year;
• Cape Town has already managed to bring down water consumption from pre-restriction levels of 1.1 billion litres a day to current consumption of 585 million litres per day;
• A new desalination plant in the V&A Waterfront will produce 2 million litres of water per day‚ and will be operational in March 2018;
• The new desalination plant will be one of a network of 8 desalination plants spread across the city. The plants will together provide 108 million litres of water per day;
• Cape Town’s city centre has been designated a ‘continuous water supply’ area which means that the impact of a potential Day Zero will be minimal on international visitors.

Cape Town and the Western Cape are open for business in spite of the current drought. Visitors are arriving in a place with a significant breadth and depth of experiences and exceptional beauty. However, as beautiful as it is, the Western Cape is a water-scarce part of the world (much like Southern California and Western Australia) and is vulnerable to the effects of climate change and is susceptible to periodic droughts.

At present the Western Cape is experiencing a significant drought. This is a 1 in 1000-year occurrence. To counter the short-term effects of the drought and the possibility of running out of water, the City has put in place a number of initiatives to increase the supply of water and make provision for extreme water shortages.

There are still many places across the Western Cape that are not as severely affected by the drought such as the Garden Route and the Cape Overberg.

Below average rainfall over a number of years has forced everyone who lives in or visits Cape Town to rethink their water usage behaviours. Responsible consumption of water is the new normal – not just in Cape Town but in many other water-scarce places in the world.

Some parts of the tourism and hospitality industry have proactively adjusted how they utilise water to reduce their consumption – giving guests peace of mind that every drop is being used responsibly.

‘Day Zero’ is a projected date that is entirely dependent on current rates of water consumption: if all stakeholders adhere to the required water savings target, ‘Day Zero’ can be avoided.

It is important to check with your accommodation partner if they have made business contingency plans in the event of “Day Zero” occurring.

Much like a local, tourists need to treat this scarce resource with the utmost respect.

I want to travel to Cape Town / The Western Cape but will there be water?

What does ‘Day Zero’ mean?

How widespread is the drought in South Africa?

Will tourists be able to bath, shower or use a swimming pool?

Will restaurants and bars still be in operation?

Which tourism activities could be impacted?

Will emergency services still function in the event of ‘Day Zero’?

Will major events still be staged?

In an attempt to reduce water usage, some hotels have implemented the following initiatives:

Given that Cape Town is currently facing significant water shortages and can expect more frequent droughts in the future, the time has come for more carefully planned long term interventions.

In addition to measures being taken to conserve water, given that dam levels have an average of 29% capacity, drilling equipment will start arriving this week to extract water from aquifers on the Cape Flats and the Table Mountain. The availability of water has been confirmed in these areas and the aquifers are expected to produce an extra 80 million litres per day from The Cape Flats aquifer and 40 million litres per day from the Table Mountain aquifer. Extraction of water is already underway in Atlantis town, with about 30 million litres of water per day expected. Treated waste water, which will be clean by the time it is released into wetlands for further filtration, will be used to replenish the aquifers.

It is important to remember, that level 6 water restrictions are limited to city of Cape Town only, while surrounding areas have not imposed the same level of water restrictions and guests travelling to these areas are mostly unaffected. We are not concerned at this stage as contingencies have been put in place as mentioned above, and we do not expect the taps to be turned off, as per the threat of Day Zero approaching, if all plans of action in place at the moment, are carried out.

A word from our friends at Cape Cadogan Hotel, Cape Town

We need to all do what we can to reduce the amount of water consumed. Our aim is to reduce our consumption by at least 20%, year on year. While a number of initiatives have been implemented from an operational perspective, thankfully many of our guests are environmentally conscious, and are working closely with us through their mindful consumption of this very scarce natural resource. You will notice that our swimming pools are empty. In line with the Cape Town City’s decision to close many of its public pools, we elected to do the same in an effort to prevent needless waste of water. We have also included some water-saving tips for your convenience below, and are so grateful for your understanding as we collectively unite to support our beautiful city during this very challenging time.

A word from our friends at One & Only, Cape Town

We are seriously committed to drastically reducing water usage across the resort. We have invested heavily in our resources, technology and water saving initiatives in order to do so.

With water at critical levels, we’re taking every possible step to effectively manage our water consumption and encourage our guests to ‘Save Like A Local’.

A word from our friends at Cape Grace, Cape Town

We have been implementing supportive measures to protect this precious commodity since 2016, and continue to do so in light of the Western Cape’s water crisis.

Some of our initiatives include:

On the 28th of December the following statement was released:

Cape Town is facing one of its worst droughts in living memory. Since 2001, the city has had a water conservation and demand management policy to reduce its water consumption. These efforts kept overall water demand relatively stable until 2014, when demand started to rise. Due to a combination of lower rainfall in the winter of 2016 and 2017, and a relatively slow initial governance response to the drought, the city officially declared a water crisis in 2017.

In early April 2017, Cape Town was down to its last 100 days of water. The water levels in the dams that supply the city had fallen to 20% of their capacity. In response, the city imposed Level Four water restrictions. These include stricter limits on residential water use and strongly recommend a limit of 100 litres per person per day. They also include a ban on irrigation, and a 350 litres per day cap on the free basic water allocation for impoverished households, regardless of household size. On 05 September 2017, these restrictions were escalated to Level Five!

However, much of this hype around the drought has been to ensure citizens are aware of the situation and that everyone is doing what they can to reduce consumption. A side effect of this awareness campaign has been a number of sensationalist headlines in the international press.

It is important not to lose perspective in light of these headlines. Cape Town is not unique: droughts regularly affect dozens of top international tourist destinations. And many top destinations exist in far more severe climates.