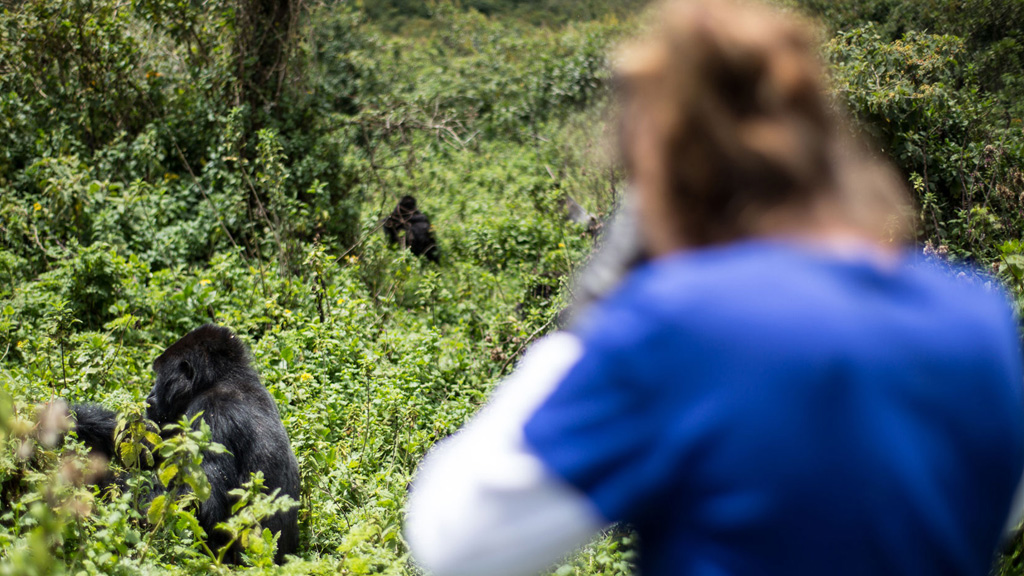 Gorilla trekking is one of the greatest things that you can choose to do in Africa!

There is really nothing like experiencing the wild mountain gorillas in their own environment. Majestic gentle creatures, the chance to spend some time with them without any artifice is often considered the greatest wildlife encounter on earth. To visit them, you will need to visit Uganda or Rwanda. You can visit the gorillas also in the Democratic Republic of Congo (DRC) but the infrastructure and stability of this area means it isn’t always the best choice.

To see the gorillas you will need to obtain a gorilla permit. These permits can cost anywhere from $600 - $800 and can sell out about 6 months in advance. They do however restrict the amount of visitors that can visit the gorillas on any given day and keep the experience an authentic one without mass tourism. They also support the local area and country and also protect the animals from poaching by giving them a value for being kept alive.

The trek itself can be anywhere from 1 hr to 5 hrs depending on the location of the gorillas, the movement of the gorillas and the pace of the group. If you imagine the iconic countryside out of Tarzan, this looks a lot like it. Thick jungle restricts the speed and keeps the pace a slow going affair. You are escorted up the mountain by porters and guides who will assist you in your efforts to see them. You don’t need to be super fit to do this walk (although base fitness is advantageous) but mobility and stability is more important. As mentioned earlier you are in what can be a slippery environment and do need to be mobile.

Once you encounter the gorillas you spend an hour with them in their environment and the experience is capped at an hour (no exceptions). You aren’t allowed to touch them (although they might touch you!) and must keep a respectful distance at all times although they might come closer out of curiosity. Most importantly you are not allowed to visit if you are sick as they might catch what you have as having a similar DNA but no immunity to your diseases could spell trouble. For this reason and for safety children under 16 years of age aren’t allowed to make the trek.

The experience itself is wonderful with a great sense of camaraderie and recognition between yourself and the gorillas. You can see the similarities and to experience an animal in its home without any setup (vehicles, bars, fences) is just incredible. It really is one of the best things to do in Africa.

These two countries are known for their gorilla experience although there are other things to do in both. Most people tend to visit primarily for the gorilla visit.

On average, mountain gorillas are bulkier than other species of gorilla, weighing up to 200 kg, though the heaviest individual gorilla recorded is a 210 kg Eastern Lowland gorilla measure in DRC.

Like other gorillas, mountain gorillas are highly sociable, moving in defined troops of anything from five to 50 animals. A troop typically consists of a silverback male (males back turns silver when he reaches sexual maturity at about 13 years old), his three or four “wives” and several young animals. Unusually for mammals, it is the male who forms the focal point of a troop; when he dies, the troop disintegrates. A silverback will start to acquire his harem at about 15 years of age, normally by attracting a young sexually mature female from another troop. He may continue to lead a troop well into his forties. Female gorillas reach sexual maturity at the age of eight, after which they often move between troops several times.

However, once a female has successfully given birth, she will normally stay with the same silverback until he dies, and she will even help defend him against other males (if a male takes over a troop, he will kill any nursing infants which are not his, a strong motive for a female to help preserve the status quo).

A female gorilla has a gestation period similar to that of a human, and if she reaches old age she will typically have raised up to six of her offspring to sexual maturity. A female status within a troop is based on the length of time she has been with a silverback; the longest serving member of the harem is normally the alpha female.

Mountain gorillas have a primary vegetation diet, and are known to eat 58 different plant species. Gorillas also eat insects, with ants being a particularly popular protein supplement. A gorilla troop will spend most of its waking hours on the ground, but it will generally move into the trees at night, when each member of the troop builds itself a temporary nest.

Gorillas are surprisingly sedentary creatures and typically move less then 1 km in a day, which makes tracking them on a day-to-day basis relatively easy for experienced guides. A troop will generally move a long distance only after a stressful incident, for instance an aggressive encounter with another troop.

Gorillas have few natural enemies and they often live for up to 50 years in the wild, but their long-term survival is critically threatened by poaching, deforestation and increased exposure to human-borne diseases. Unlike their lowland cousins, mountain gorillas have never been reared successfully in captivity.