This pause on travel isn't forever, and so with this in mind Bench Africa seeks to inspire your future travel to Africa; after all the warm and welcoming people of Africa, and their inspirational conservation efforts are going to need visitors more than ever!

In the distance, billowing swirls of dust form in the plains of East Africa. At certain times of the year, this quiet savannah experiences a steady, thunderous sound that can be heard for miles around. Thousands of hooves pound on the flaky ground, from the plains of the Serengeti towards the Masai Mara, as countless wildebeest begin to move. Dubbed as the ‘greatest show on Earth,’ this natural display is a highlight if you intend to experience a safari in East Africa.

To help you plan your safari, the consultants at Bench have put together a general guide to understanding the wildebeest migration!

Often referred to as an event that only happens once a year, the wildebeest migration is actually a continuous process of almost 2 million animals covering more than 1,800 miles from Tanzania to Kenya. The majority of the animals are wildebeest, but they are often joined by zebras and Thomson’s gazelle on the journey. Together, they trek the dusty plains and attempt to cross the crocodile-infested Grumeti and Mara Rivers, in search of greener grass as well as better sources of water. 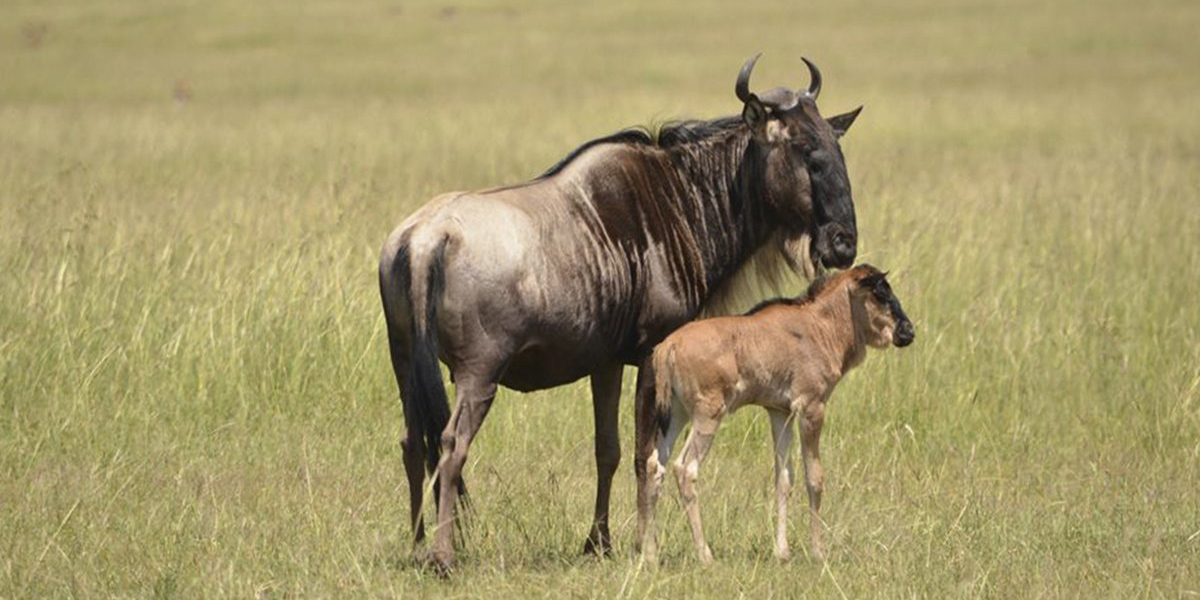 We like to think of this as the start of the cycle. At this time of year the herds are found in the short grass plains of southern Serengeti, called the Ndutu region, where they choose to give birth to their young. From December to January, the majority of the female wildebeest are pregnant as they settle and graze over grass made abundant by the plentiful rain. By the time February sets in and more rain graces the plains, the females would have given birth. There could be more than 400,000 babies born in any given year. Because of the profusion of vulnerable calves, lions and cheetahs proliferate the vicinity of the animals as well. The youngsters soon grow big and trot along with their clumsy legs beside their mothers. Grasses slowly become overgrazed and the nourishing rain stops, signalling to the herd that it’s time to begin their exodus. 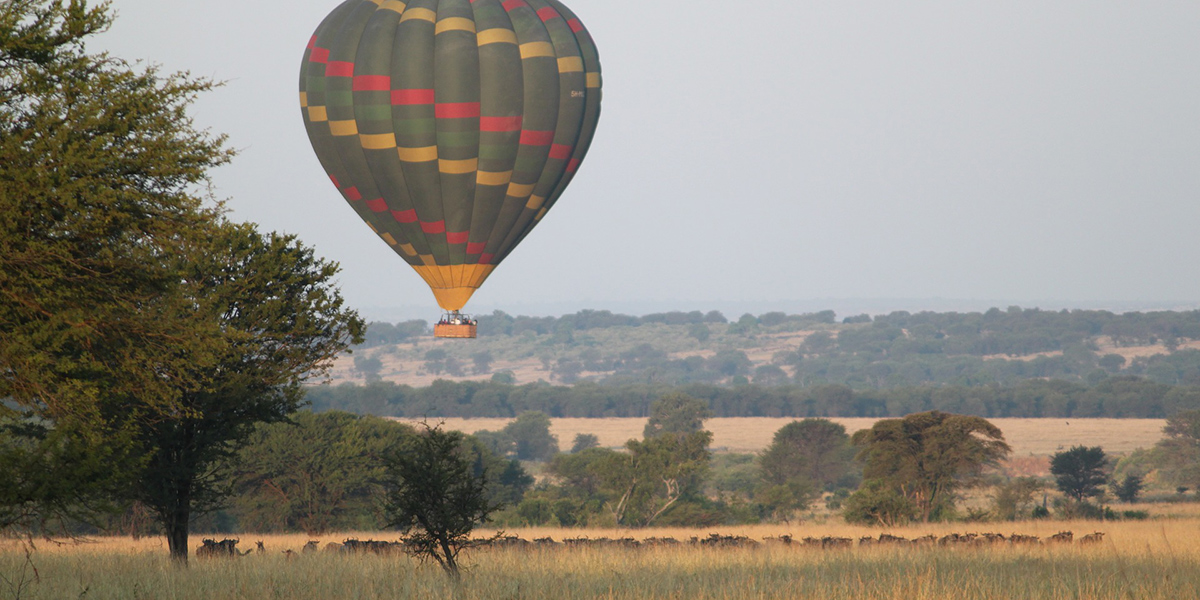 Wildebeest normally travel in their herds as they head towards the Northwest. A bulk will pass by the Western Corridor and through the Grumeti River, while others will head straight north to Seronera. Taking advantage of luxury tours in Africa, especially inside an air balloon and flying over the Serengeti, will reveal the size of the herds dispersed throughout the region. As they approach the Grumeti River, the herd will face their first major obstacle in the journey. Grumeti is infested with some of Africa’s most fearsome hippos and crocodiles, the latter of which will feast on any stray and vulnerable animal that comes their way. If there has been a heavy rainy season, the river swells up and forces the animals to jump head first into the unknown and dangerous water. 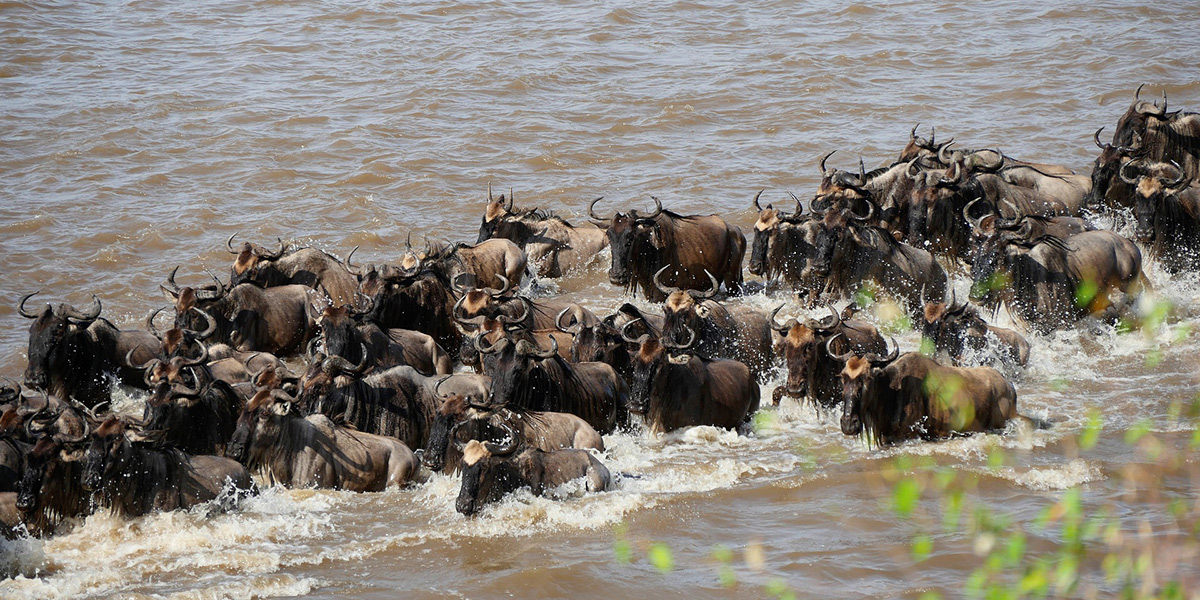 This is the time of year that most people associate with the wildebeest migration because this is when they should have crossed over into the Masai Mara. The herds continue to push forward North until they reach the banks of the Mara River. Those choosing to do their safaris in Kenya can revel in breathtaking views of the dramatic river crossing. When the animals arrive, they sometimes just stand there gazing at the other side, at the promise of lush green grass. They could stand still for a long time until a brave soul jumps into the fast-moving river which instigates a flurry of wildebeest to follow. It’s one of the most spectacular sights in nature! 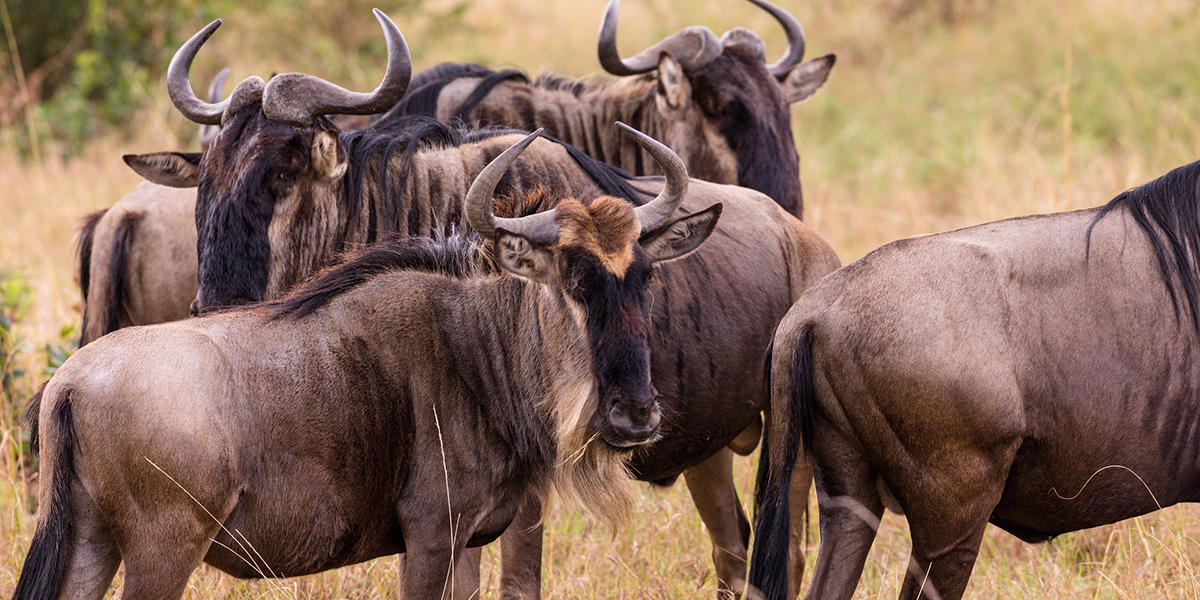 In October some of the animals will start the journey south again, crossing back into the Serengeti using the Eastern side. By November most of the herd would have left the Masai Mara. They’ll linger all across the Mbuze Mawe, Seronera Valley and Lobo areas of the Serengeti, feeding on the grass and keeping close to these areas for the water supply. They will continue traveling deep into the South following where the water is found. By December most have returned to the southern Serengeti preparing to give birth and the cycle starts again!

It is important to note that while the overall pattern remains the same each year, the exact speed and path of the wildebeest migration depends entirely on the rains that year. As with any safari, we can never guarantee what wildlife you will see, but by following this guideline you will certainly give yourself the best opportunity to witness the herds.

For more information or to book your own post covid travel to East Africa in 2022, please contact the Africa Experts or call us on 1-300-AFRICA!